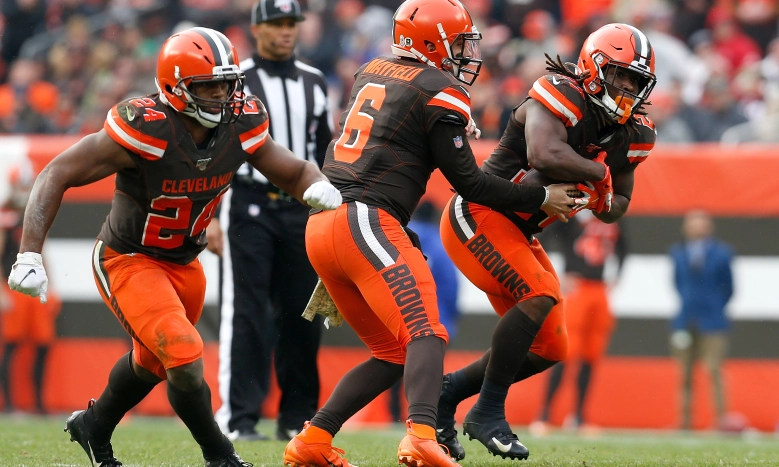 In this post, we take a look at Nick Chubb's profile and try to visualize his output following the arrival of Kareem Hunt in the Cleveland offense.

If you prefer to read this in the form of a jupyter notebook, here's a link to that. You can also download the source there.

How did Kareem Hunt affect Nick Chubb's output towards the end of the season? Let's use some data visualization to see how Hunt's arrival in to the offense affected Chubb's output. In future posts leading up to this year's Fantasy Football drafts, I want to do a further deep-dive in to Chubb's profile. He's in a critical spot in the draft. According to ADP data, he is likely to go around pick 11 - 17 in most leagues. This spot in next year's draft is going to be running back dense - filled with the likes of Josh Jacobs, Aaron Jones, Nick Chubb, Mixon, Henry, and maybe even Fournette. If you land in this spot, making the right decision here is likely going to make or break your entire season. For that reason, the first string of posts in our Fantasy Football analysis series is going to focus on this turn in the draft and this group of running backs.

In this post, we are just going to look at one aspect of the Nick Chubb dilemma - Kareem Hunt's impact on his performance and what that potentially means for 2020. No one denies that Nick Chubb is a beast - and while this post might seem down on Chubb's profile, I think future posts will show that he still can be a valuable RB2 in your lineup in 2020.

Let's start off a new jupyter notebook by importing some libraries.

There was hopeful optimism amongst Chubb owner's last season that Hunt's entrance in to the offense would not affect Chubb's output. The theory was that if Hunt can improve the offense and help move the chains on a few drives, then that would make up for the reduction in Chubb's FF output due to being in a timeshare. In short, Chubb's share of the offense would drop, sure, but the offense itself will grow also so those two factors will offset each other, leaving Chubb's output unaffected. That was hopeful to say the least.

Did the offense ever grow? Did this theory actually come true? We'll find out in this post.

To start, let's make an empty DataFrame and concat together weekly data for 2019 to make one big DataFrame. You can find weekly data underneath the "Data Sets" tab in the navigation bar.

Next, let's find Hunt and Chubb in our df.

Now we're ready to run our data visualizations. We are going to be noting the change in Chubb's usage and fantasy output before and after Hunt's arrival, and also how the entire offense changed.

We use 10 as the cutoff week because that is the week Hunt came back from suspension. Below is what we get as an output. 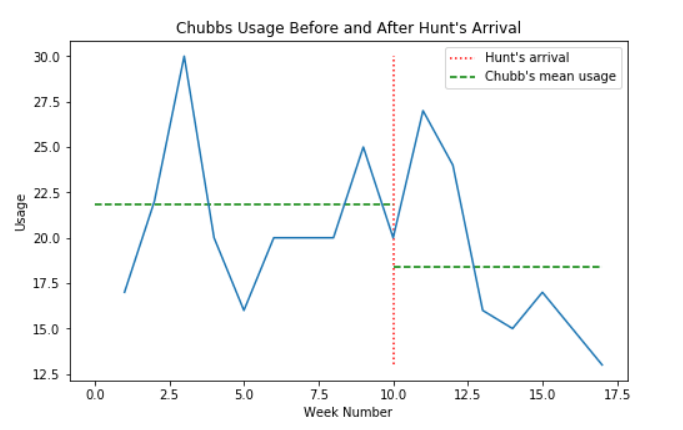 Based off this visualization, things are not looking good for Chubb. Moreover, Chubb's usage stayed high 2 weeks after Hunt's arrival, but steeply dropped off thereafter. This may have been because it took 2 weeks for Hunt to "find: his role in the offense. Week 17 was a weird week and will continue to show up as a weird/outlier week in our visualizations. Starters didn't get benched this week - which was my first thought. The offense just didn't perform against the Bengals. Baker threw 3 INTs and Chubb and Hunt had a combined number of carries of 16 for 45 yards. Yikes.

Anyway, the green line shows Chubb's mean usage in the offense before and after Hunt's arrival. Usage, again, is defined as targets + number of carries. As you can see mean usage dropped, and there was a downward trend in Chubb's involvement of the offense. The red dotted line marks the arrival of Hunt into the offense.

Let's run the same process, but this time for Chubb's Fantasy Football output instead of usage.

And our output below. 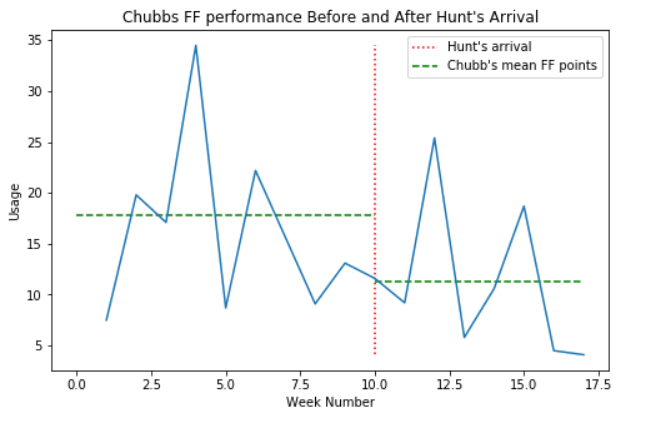 Could all of this have been that the RB offense got worse after Hunt's arrival? In other words, the exact opposite of what all the hopeful Chubb owners thought last season? As we'll see below, the offense, on average, stayed the same.

As you can see, the mean output for Cleveland's RB core in terms of FF performance did not increase. Again, let's plot this data and visualize the results.

And one more time - our output below. 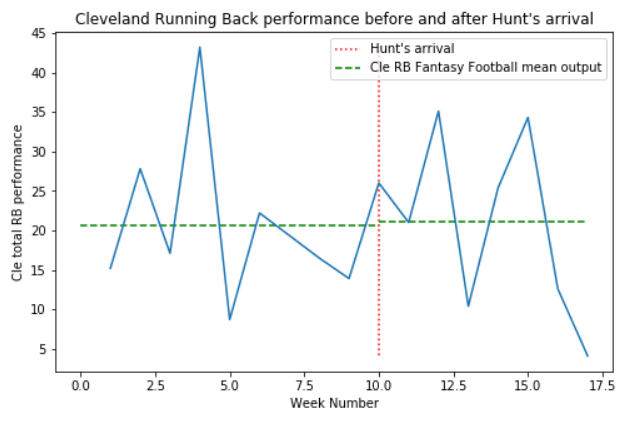 This is probably not a great look looking forward to 2020 for Chubb. Hunt is going to remain a part of the offense, so it looks like for the time being, this timeshare is going to continue. I don't want to speculate on it too much as we only saw a glimpse of it during the 2019 season, and Chubb is shaping out to actually be a fantastic NFL running back. In future posts, we are going to analyze Chubb's profile even further and try to find some light at the end of the tunnel for taking him in the 2nd round turn. 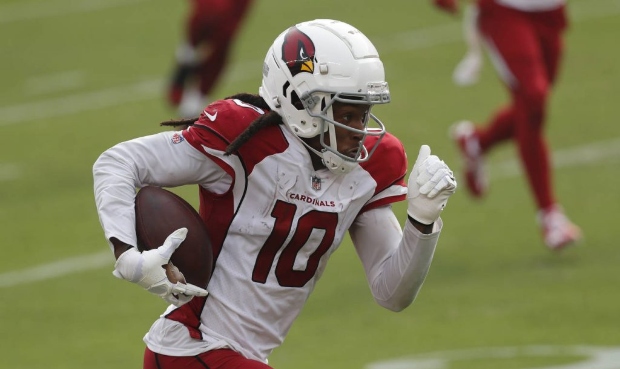